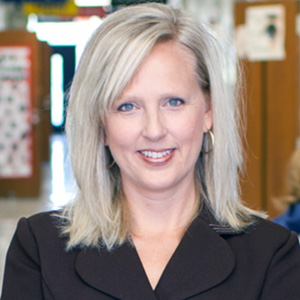 “WCA instilled in me a drive for excellence,” says Kristen Pelster, director of curriculum and professional learning in the Fox C-6 School District. “I always felt that every endeavor, program, initiative, class, and activity was created and implemented with a high standard of excellence and in return that same standard of excellence was expected from me as a WCA student.”

While at Westminster, Kristen was a member of the cheerleading team, choir, and the hospitality committee, and she played Snoopy in Westminster’s first-ever musical, You’re A Good Man, Charlie Brown. She received her bachelor’s degree in music education from Missouri Baptist University and her master’s and specialist degrees in education administration from the University of Missouri-St. Louis. She has worked in public education as a teacher and middle school principal for 21 years.

“When I became an educator, it was very important to me that I replicated in my classroom and school what I experienced at WCA,” Kristen says. “My life quote (from Aristotle) definitely has its beginnings during my time at Westminster: ‘You are what you continually do; therefore excellence should be a habit and not just an act.'”

Kristen’s passion for developing positive character in students has taken her on an incredible journey in public education. She has been a keynote speaker at conferences all over the United States and has spoken at a U.S. Senate Briefing in Washington, D.C., which focused on the importance of including social, emotional, and character development in U.S. educational reform documents. Educators from all over the United States and six foreign countries have visited her middle school to learn best practices in character education. In 2006, Kristen’s school was named a National School of Character from the Character Education Partnership in Washington, D.C., and was featured in a USA TODAY article, “What Schools Can Do.”

“My passion for character education definitely comes from the Christian values and character traits that I learned from WCA,” Kristen says. “I will always be grateful for the firsthand experience of how academic standards and character development can be woven together in a curriculum that produces student achievement. So many public school educators view character development as a ‘separate program’ that they just don’t have time for. They are so missing the boat! WCA is the greatest example of how academics and character work hand in hand to produce top-notch students and citizens.”